Constant improvement seems to always have been Facebook’s motto, and the same shines clearly through the flurry of feature updates Facebook has been making since its inception. While many of its UI changes have invited a lot of criticism, this particular feature has resulted in bloggers worldwide breathing a collective sigh of relief, and will only be an added weapon in your Facebook Marketing arsenal! 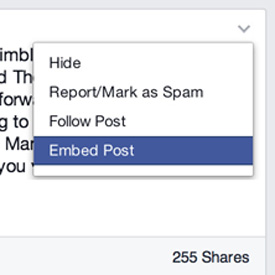 The Embed Post feature also supports in-line video streaming, meaning that if you share a video in your Facebook post, embedding it in your blog will allow your readers to watch the video without leaving your blog.

So if you have set up shop on Facebook, this feature is bound to come in handy. How many of your are rejoicing? Let us know with your comments!